I’m sure you’re hearing about the low-carb, keto or ketogenic diet. It’s all the rage. So are these easy 30-minute keto dinners that I have for you. 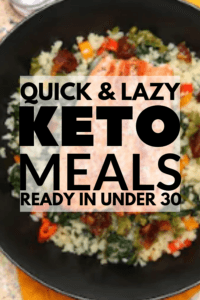 I began my low carb journey many years ago. I had put on 75 pounds with each pregnancy and would take a few pounds off but never all of it. It was with that struggle that I began my journey. One that I assumed was one of weight loss but soon became much more than that.

My low carb journey became a way of life. I had begun to not just lose weight, but to becomehealthier and feel better. Prior to starting, I was always sick. And when I say sick I mean completely lose my voice and hold onto whatever illness I had acquired for weeks. I thought that it was just me and my body or that it was just the kids bringing illness home from school. But I soon found that to not be the case as I am rarely ever sick now.

Being a mom and someone with a corporate career and an hour and a half commute each way to work, I had no time to be making a meal for my ‘diet’ and one for the family. Are you kidding? Who has time for that? For weeknights I need easy 30 minute keto dinners.

With most ‘diets,’ you would need separate meals for yourself and the family.

What I found with low carb, this was not the case.

I could easily plan meals for the whole family.

In all honesty, I didn’t want them eating a lot of bread and sugar anyway. It isn’t good for us.

And let me tell you, prior to this we indulged heavily.

We were having soda all of the time, sugar snacks and candy and bread with every meal.

I also wanted to teach my kids a better way. One where they weren’t starving. They would have a full belly. All the while learning to eat healthily and feel better.

So, back to my not having time…

I was already super busy and needed meals for weeknights that were quick and easy.

But they also had to enjoy it.

I remember being made to eat weird things as a kid because my mom liked them. But they were gross. Like canned spinach with hard boiled egg chopped in it. What the hell is that???? (Is there something weird your parents made you eat? Let me know in the comments.)

I wasn’t about to do that to my kids.

Having said that, remember, if one didn’t like vegetables, they were still going to have to eat them lol. I just had to prepare meals they liked. Weed out the ones they didn’t.

I began my research into that fit into my criteria. Three crucial points. They had to be:

I did save other recipes for weekends and special occasions but weeknights had to fit these 3 rules.

Once I learned more about low carb and already knew the basics about my families likes and dislikes, I armed myself with loads of recipes to weed through.

For us, I kept notes on them. If it was one no one liked, I noted never to make it again. If it was a recipe a particular person disliked, I noted that. It could easily be made on a night that person wasn’t home.

I soon had a multitude of easy to make recipes we all liked. And they are kid-friendly.

After I became more adept, they were even made for nights with company.

Unlike other plans, this is real food. You’d never know it was gluten-free, sugar-free, and low carb. Guests were never the wiser.

And I didn’t tell them.

You might wonder why. Well, there are several kinds of people when you announce you are doing something new and different. They often fall into at least one of these.

There’s more but these are the main excuses.

So, I learned not to tell them. It wasn’t like I was hurting them. I made real meals. Nothing strange. They just fell into the gluten-free, sugar-free and low carb rule.

When they asked for the recipes, I gave it to them. Without saying low carb

I want to stress that my kids weren’t deprived. They would get to eat out, they had ‘regular’ foods at other family members homes, holiday foods, etc.

So, if you are learning about low carb and/or keto or are already on it and looking for tried and true recipes, I have done the legwork for you.

These are all of those recipes that we have given the family stamp of approval.

Stop back by and let me know which ones you have loved or even the ones you didn’t. I love hearing from you. I think camaraderie in these lifestyle journeys is important. Allies, if you will.